It's once again time to take a break from my musings to hear from this week's guest blogger.  He's the owner of CCI Studios (a corporate sponsor of Run Strong and the creators of the Run Strong website) and an amazing soul that will be joining me in my marathon quest in October.   He has been one of my most committed and enthusiastic supporters in this journey and he also happens to be my brother...not to mention (get ready for my unapologetic sister brag), he was recently named Sarnia's Citizen of the Year!  This week, I asked the amazing Scott Palko to send me his thoughts on why he - and CCI - are supporting Run Strong.  Here's what he had to say (thanks for running with me!):

Corrie is a human goldfish.  She can go through her packed day of being a wife, mother, daughter, sister, aunt, friend, entrepreneur and runner and have the world cave in.  Yet, like clockwork, tomorrow’s morning hits and she is the reverse-Cinderella.  The resetting of the clock resets her dedication to change and she forgets the bad from the day before like it did not happen.  The world can be great, she can make it that way – and the glass shoe will fit perfectly.  Many people say they live this way, but few actually do it – C Dawg is one of them.

So, when I have my bad days and I begin to struggle with whether or not I can actually change the world, I am inspired by this trait of perseverance in my sister.  I am motivated by her bottomless well of belief in the good that we, as individuals, can bring about.  I am in awe of her actions in the face of societal contempt and her selflessness in a world of narcissism.  At the same time, I am reminded that simply thinking highly of her is not enough – I must act.  I must help inspire the inspirers by actively embracing their efforts.

When people ask why I am running this marathon with her and why CCI Studios supports Run Strong – it is not just because of the great cause Run Strong supports, it is because when someone dedicates themselves, day-after-day to doing good – they need to know they are doing it.  They need to know that their actions are inspiring other people and the two hands they have attached to them are working toward building a brighter future for everyone around them.  They need to know that their unrelenting faith in human beings and unabashed concern for the inhabitants of our world – the majority of whom they will never meet – IS making a difference.  The world IS changing because of their efforts – and their works are, well…working.

So, that is my reason for running this marathon with my sister and running this race of change with all of you.  We need to celebrate and support those who are making a difference.  It’s not enough to assume these individuals will just keeping doing good – we need to tie up our shoes, climb to the mountaintop and exclaim “Thank you.  You have changed my world, which has, in turn, changed our world”.  Today, it is my sister Corrie’s marathon.  Tomorrow it may be my sister Marlo or my brother Joe or my parents or anyone of you who need to know your actions are making a difference.  To that end, your call should be answered because you are making a difference and your actions are bringing about change, as well.

Change is happening – and we are all making it so.  In this case, I thank my sister for taking on this task and allowing me to run her race of change beside her, with the purpose of inspiring her to continue to make the world the place she believes it can be.


(Corrie's note: Please consider supporting Interim Place with a donation through Run Strong.  100% of proceeds will go to Interim Place's programs and services for women fleeing violence and their children.  You can make a donation by clicking on the button below or email me at corrie@run-strong.ca if you'd like to donate offline.  Thanks for your support!!)

Posted by MindBridge Strategies at 11:05 AM 3 comments:

How I Learned to be Grateful for My Legs


A good friend of mine recently commented that running a marathon is a spiritual experience.  I can imagine that in the agony of those 42 long kilometres, I will need to get acquainted with my spiritual self and, in fact, have had to find inspiration to push on through many of my training runs.

Many of you may know Hannah’s story...and a lot of you were (are!) a key part of the story line.  Hannah was born in August, 2004...19 days ahead of schedule.  People say you forget your labour and delivery the minute you look at your child, but I clearly remember every single moment of it.

Hannah was a beautiful, happy, pudgy, baby with a head full of perfectly formed curls.  I was a neurotic first-time mom...googling every wheezy sound or odd movement she made to ensure that she would survive the next 24 hours.  When Hannah was 3 months old, I started to have a mom’s intuition that something wasn’t quite right.  Many people kindly assured me that not every baby develops according to “What to Expect the First Year”, but Hannah wasn’t making any effort to move toward any of the first-year milestones...sitting up, rolling over, or - later - crawling.  At her 3 month and 6 month Healthy Baby check-ups, I talked to our doctor who felt that it was a factor of Hannah being a big baby and that she would eventually catch up.

When 1 year rolled around and Hannah was making no effort to get on her feet, I stopped accepting the Big Baby Theory and asked for a referral to a pediatrician.  We saw Dr. MacGregor, an amazing pediatrician who patiently listened to all of the diagnoses that I had already made as a result of my exceptional internet research, and then politely suggested that maybe we should let a neurosurgeon do the diagnosing.  Hannah was booked for an MRI and an appointment with Dr. Drake, a neurosurgeon at Sick Kids.

What Dr. MacGregor had discovered in that initial exam was that Hannah’s feet did not bend at the ankles...something was pulling her lower leg muscles in both legs extremely tight, and he hypothesized that it was a neurological issue, related to either her spine or her brain.

Many months, a host of doctors, and a battery of tests later, Hannah was diagnosed with cerebral palsy.  It is a spectrum condition, so some children present mildly and others can face severe challenges.  All we knew at the time was that it was causing Hannah’s legs not to work properly.  She was almost 2 and still not standing on her own.

During the testing and diagnosis period, we had been referred to Erinoak (now ErinoakKids) to begin treatment.  I tried to show everyone what a tough cookie I was during this period of our lives, but when I think of those days of watching Hannah’s little legs put in casts to try and get them to bend in the right position; to her being strapped to a contraption that artificially kept her in the standing position that she couldn’t sustain on her own; to her learning to walk on her knees because she couldn’t bear weight on her legs; and eventually to her little ballerina-decorated leg braces and granny walker that she pushed everywhere she went, I still have to swallow the lump in my throat.  Some of that period is a blur now, but I remember with extreme clarity being told, “We don’t know if she’ll ever walk” and “She will likely never walk without an assistive device” and “She’ll definitely have to wear leg braces until she stops growing.”

The most difficult part of all was that the doctors wanted Hannah’s treatment regimen to include regular Botox injections into the muscles in her legs.  I count the Botox days among my worst as a mom.  We would go into the treatment room, where they would lay Hannah face down across my lap on a little cot and then inject her 5-8 times in each leg while I restrained her.  As you can imagine, she would scream to high heavens, but Hannah’s incredible resilience is one of the reasons she is an amazing gift and, once the injections were over, she would get up, wipe her tears and tell the doctors, “Thank you”.

Hannah took her first steps in October, 2006 at 26 months.  Last year, Hannah ran her first 1 km cross country race without stopping, without assistive devices, and without leg braces.  She no longer needs Botox injections.  I credit the power of prayer, the incredible medical support, the powerful love of our entire family, and her unbreakable spirit for how far she’s come.  In those early days of uncertainty around what Hannah’s future held, so many prayed that she would be able to use those tiny pudgy legs to walk one day and I swore with everything in me that if we were given that gift, I would set an example of never, ever taking our abilities for granted.

That is one of the reasons why, despite not being a natural athlete, I will run for as long as my legs will let me...and that is how I learned to be grateful for my legs. 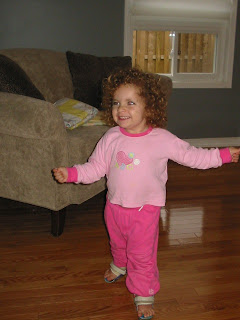 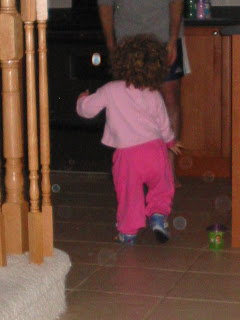 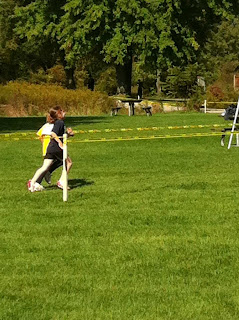