Corrie’s note: When I first wrote this blog, I had been deeply affected by two amazing happenings. However, over the past weeks I’ve also been deeply moved by – and want to acknowledge – the incredible generosity of those who have made recent donations to Run Strong.  As I’ve said before, the real success of this initiative is if there is if there is even a small increase in the capacity to meet the needs of women and children fleeing abuse.  I am so very grateful for the donations that have been made and for the generous hearts behind those gifts.  Thank you, thank you.

On March 20, 2012 at 6:20 Toronto time, I boarded a plane bound for Rome, Italy.  It was any day for most people around me...life and routine as usual.  However, that day and time will probably stick with me for the rest of my life because in that moment I knew some of the worst anxiety I have ever known in my life.

To say I am not a good flyer is an understatement.  From the time I was very young (7 or 8 years old as I recall), I have had recurrent dreams about plane crashes...not just yearly or monthly, but at least once or twice a week.  Applying my exceptional psychic abilities (and – let’s be honest – largely influenced by the movie La Bamba), I decided that this was my sub-conscious’ way of giving me a heads-up on how things were going to end for me.  You can well imagine, then, what the moment of saying good-bye to my family to go on a trip looks like.

While I have flown several times and absolutely love to travel and experience new places, I had all but resolved myself to the fact that I would never have it in me to fly overseas.  I wanted so desperately to go to Europe – among other reasons, to see places that my family immigrated from – but did not think I could bring myself to get on a plane that would wander out over ocean nothingness...miles from any safe airport to land at in the event of an emergency.  When the opportunity to go to Rome came up, I knew that I was going to have to face my worst fears if I was going to go...and at 6:20 on March 20, 2012, I did just that.

I had always dreamed of what it would be like to go to Europe (I mean, literally...in between plane crash visions, I would dream of sightseeing at Buckingham Palace).  When the plane took off, I started counting the 530 minutes until we would be on land again.  I watched the plane’s progress on the digital map and I’m pretty sure let out an audible groan when the little moving plane icon headed out over the Atlantic. But then, the most amazing thing happened...

At around 1:00 a.m. Toronto time, after flying in pitch blackness for 5 hours, I could see a hint of blue out the plane window...a hint that became a gush of blue and started to spread across the sky.  In my exhausted, anxious state, I let out a massive, cathartic, glorious exhale as I realized that I was now flying into a European dawn...while my family, friends, and sweet girls were tucked in their beds fast asleep, morning was breaking in southern Europe and I had safely made it to the other side of the Atlantic.  For the rest of my life, I will never forget that exact moment.  I realized what a massive, imposing barrier fear is and that the rewards can be incredible if we face it head-on and become determined to overcome it.  I thought of my marathon and wanted to share the exact moment with you as a reminder that amazing things can happen when we refuse to let fear win.  Here is that moment in pictures: 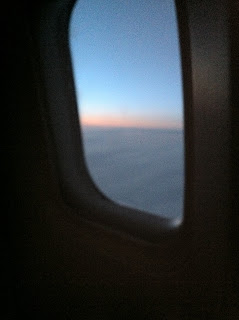 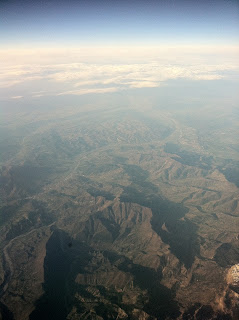 Moments later, my breath was taken away as we flew over the French Alps.  I simply couldn't believe I was there.

I arrived back from Rome on March 27th at approximately 2:30 p.m. Toronto time.  When I landed, I let everyone on Facebook know that I had survived the traumatic journey.  A number of people posted comments saying how glad they were that I was home safe, but one post stood out: as I was sitting on the tarmac exhausted and elated, my friend Mike Herzog posted, “Time for a run!!”

Now, you may recall that I mentioned Mike in a previous blog post and that – as a great supporter of Run Strong  – Mike was a previous guest blogger, but on March 17th – 3 days before I left for my trip – Mike did something that has changed my entire approach to this marathon: of his own huge-heartedness and volition, he developed a training plan for me based on where I was starting from, my typical speed, and my goals for the race.  And then he challenged me (and has been ever since) to stick to it.

Before Mike sent me the training plan, I was loosely following the “Non-Runner’s Marathon Trainer”...and praying a lot that I could do this.  When Mike sent me the plan, he (as an accomplished endurance athlete) basically said to me, “Not only can you do this, but you need to think bigger because you can run faster than you are running.  It is, however, going to take consistent and diligent training.”

Mike’s guidance has changed everything about my approach.  I am now running faster and smarter and I feel significantly more accountable for my training.  It’s also changed how I think about myself.  He has told me over and over again, “You can achieve incredible results: you just have to be whole-heartedly committed to it.”  To know that I am not limited by where I am at today has set me free to imagine not only that I can finish but that I can become a strong, consistent runner even beyond my marathon.  By extension, I’ve learned that we can all become our best selves when we do it with passion and commitment.  Thank you, Mike, for the incredible impact you've had.

No doubt, March was an amazing month for me.  2 incredible experiences taught me to think beyond my own perceived limits and that courage and persistence can change everything.  To everyone reading this, I wish you safe travels, passionate pursuit of your goals, and strong, brave running.


Please consider supporting Interim Place with a donation through Run Strong.  100% of proceeds will go to Interim Place's programs and services for women fleeing violence and their children.  You can make a donation by clicking on the button below or email me at corrie@run-strong.ca if you'd like to donate offline. Thanks for your support!!

Posted by MindBridge Strategies at 1:33 PM No comments:

Thoughts on Our Village


One of the great learnings for me since I have been working with Interim Place has been to come to a greater understanding of the rich diversity of our communities and, no less, the remarkable diversity of people around our world.  I am developing a keen understanding that the lens I see the world through is formed by the complex intersection of my culture, background, religious beliefs, race, gender, and life experiences, among other things.   That intersection is unique to me, as yours is to you.  Our great challenge is to build peace and decrease violence in a way that not only respects, but appreciates, and celebrates that diversity.

This is why we speak particularly about violence against women.  Violence shows its face in (too) many forms and against both genders around our globe, and I have learned that to understand its root causes and effectively address them, we have to understand how violence is perpetrated and experienced in a multitude of unique situations and circumstances: there is no “one-size-fits-all” approach to eliminating violence.

To eliminate violence against women is not to deny the existence of violence against or among men.  I would love for humanity to be able to say that non-violence and peaceful conflict resolution is a fundamental characteristic of our entire species.  Yet to address issues of women abuse, there is undeniably a need to look at the unique ways that violence is perpetrated against women and to address those issues directly.  It is to be honest about the role that power plays in violence.  It is to understand that women experiencing violence may also face poverty, employment, housing, mental health, immigration, addiction and other issues that are related to or affected by their experiences as women.  Sometimes these additional issues affect whether women will continue to live with the violence.

This realization was how I came to be involved with Interim Place: many times while up in the middle of the night with my newborn baby girls or in the stress of the most difficult days as a mom, I wondered how I would cope if I had to deal with all of these mom stresses while also fearing for the safety of myself and my children. Would I have the means to provide an alternative for my family (particularly having been out of the work force while on almost consecutive maternity leaves)?  Who would care for my children while I had to work?  How secure would my employment be if I had to be absent to care for a child that was sick or had special needs?  Where would we live? How would I know what my legal rights would be as a mom?  Could I afford a lawyer to tell me?  What if, in addition to these pieces, I was living with a disability?  I realized that women in violent situations have painstaking decisions to make and that we can’t understand women’s experience with violence in isolation of all of these considerations.

Through the amazing women working at and with Interim Place, I continue to learn and think about these pieces daily.  My challenge to everyone reading this is to consider these pieces the next time you find yourself generalizing about people, their experiences, or – in particular – about women experiencing violence.  Our backgrounds and experiences are mind-bogglingly unique, so our analysis on how to address critical issues such as abuse has to reflect that, including what it uniquely means to experience violence as a woman.

To close off this week, I want to share a piece that always gives me perspective and reminds me that my individual experiences are not global experiences.  While we share a great common humanity that binds us, the world is infinitely rich in the diversity of the people that live in our incredible global village.  It’s a description of how the world would look if it was a village of 100 people.

If the world were a village of 100 people:

In all of its diversity and with all of its challenges, it really is an awesome world...with lots of work to be done.


Please consider supporting Interim Place with a donation through Run Strong.  100% of proceeds will go to Interim Place's programs and services for women fleeing violence and their children.  You can make a donation by clicking on the button below or email me at corrie@run-strong.ca if you'd like to donate offline. Thanks for your support!!

Posted by MindBridge Strategies at 11:02 AM No comments: